The Stringed Instrument Company was founded by luthier Peter Madill in 1975. Cath Newhook joined him as his apprentice in 1977, climbing up well-worn wooden stairs in the old Durham Lane Browns Mill building to the workshop on the top floor. 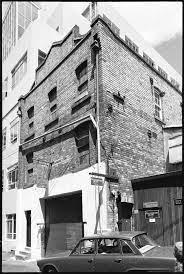 Here’s Cath at her workbench in Browns Mill. It must be early in her apprenticeship – note the coffee mug placed dangerously close to the edge of the bench. She learnt the hard way about that one! 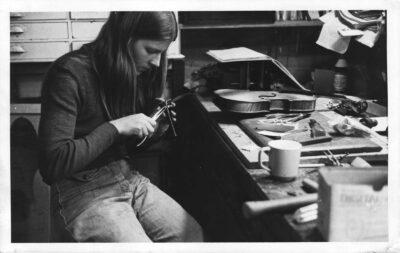 Just before Mainzeal’s demolition bulldozers flattened Browns Mill in 1988, Cath and her late husband Ken Wilson shifted the Stringed Instrument Company to its present location in a 125-year-old cottage at 16 Charles St. The move was so successful, they opened a retail showroom to complement the workshops shortly afterwards. After Ken’s death in 1995, the Stringed Instrument Company continued to be a family affair, with Cath’s mum Marjorie running the hire fleet until her retirement, just after her 98th birthday. Alan, Cath’s husband of 22 years, provides his expertise in sales, strategy, web and systems design, and administration, and we have been joined by a wonderful extended family of international luthiers over the last two and a half decades.

Placed close to popular performance and rehearsal venues and at a meeting point of Auckland’s major motorways, the company has thrived, buoyed by a vision of what can be achieved through skill, dedication, knowledge, uncompromising quality and excellent service.

And we have wonderful students working for us: Angeline, Danny, Emma, and Michka.